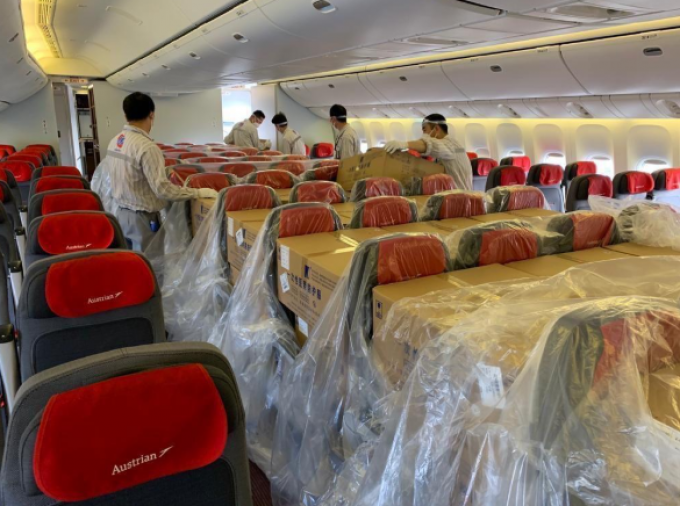 “Container after container” is switching mode to air freight, as the limited air network sees a distinct upturn this week in PPE and medical shipments.

But forwarders are reporting significant delays and high costs as companies, governments and health services “try to buy their way out of the equipment shortages”.

“This trend is driven by relief and PPE volumes and even further decreased air capacity, after recent CAAC announcements to limit the number of passenger flights per carrier and market.”

He added: “The immigration rule for crews adds difficulties for rotations and number of flights. Freighters are nearly completely blocked and the added passenger charter flights cannot balance demand and supply.”

One European forwarder said: “The average backlog from China is seven days – due to restricted aircraft availability – as in, once you have booked freight it takes seven days’ dwell before uplift.”

Another said: “Gloves, masks, gowns and so on are lightweight products, and it is costing about $185,000 for a 40ft container equivalent, averaging 70 cubic metres or eight tonnes, to be moved by air from the main China gateways and Hong Kong to Europe.

“It’s madness; but unless you pay, you don’t get goods moved. And even then it is taking 10 days on average, due to the demand.”

Transatlantic is also busy, according to sources, with IAG implementing a “large programme” of passenger freighters, both import- and export-driven.

“Rates are four to five times what they would normally be on pretty much all routes and lanes for the time of the year,” said Mr Wystrach, adding: “The transatlantic westbound lane is still under pressure and we foresee rates remaining on this week’s level for another two weeks.”

Sea-air, which had been touted a month ago as “an efficient and cost-effective method of moving goods”, has “gone bonkers” according to one forwarder.

“With the two main hubs of Singapore and Dubai on lockdown, rates have gone up to $6, $7, $8 a kg from the $2 level three weeks ago. It’s primarily due to restricted capacity, with freighters being the only possibility.”

And there is little sign of stability any time soon.

“There are signs that volumes may increase again in May, and it will be interesting to see how fast carriers can react, to bring additional flights in again, and we expect the market to remain volatile,” concluded Mr Wystrach.